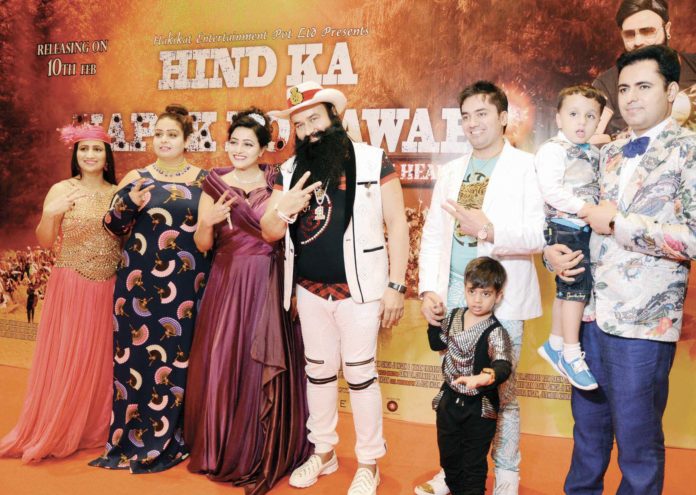 More than 5000 fans became witness to the occasion. Attired in beautiful & dazzling dress, as soon as Dr MSG, along with other Bollywood stars reached the red carpet venue, the clappings and cheers burst out in the hall.

Along with Revered Guru Ji, the co-director of the film and Royal Daughter Honeypreet Ji Insan and playback singer in the film, Royal Daughter Amarpreet JI Insan and other members of the royal family also reached the spot for the premier show.

Bollywood personalities described the film, ‘Hind Ka Napak Ko Jawab’ as a valuable gift for the nation. At the premier show Dr. MSG answered the questions of the media very frankly and talked about various aspects of the film at length.

The fans danced on the tunes of the film. Hotel Sahara Star’s banquet hall was decorated beautifully. Everywhere giant size posters of the film, ‘Hind Ka Napak Ko Jawab’ were put up.

These posters attracted interest of everyone present. Three huge screens were also installed for showing the film.

These Cine Stars were Present at the Grand Premier

Rs. one lakh help to the Family of the Martyr :

Reaction of the Bollywood Personalities after watching the Premier Show :

It is a beautiful movie. The clapping and whistles during the show proved that the film has been made very well. The film gives a message to every Indian and is also a lesson to the enemies of the nation that anyone who tries to disturb the unity and integrity of the nation will not be spared. Such people will suffer the consequences.

This film has action, thrill, romance, drama, everything. No wonder it is a full package. Amazingly all this work has been performed by Dr. MSG Himself. This proves that He is a ‘One Man Industry’.

Cinematography, photography and music are wonderful. He said smilingly that generally hundreds of people are required for the making of a film, but I feel Dr. MSG alone is enough to make the film. – Shekhar Suman, Actor

When the Indian film industry began, Dada Saheb Phalke had performed all kinds of roles. He directed and produced the film, acted in it and was also the art director. Besides he also performed role of the cameraman.

While looking at the film today, I felt that someone more talented than Dada Saheb Phalke, who can perform such varied roles in the making of the film. Guru Ji is inspiring others to go beyond their limits and perform extraordinary tasks. Guru Ji is taking forward the film industry. In this film. He has given us a message of patriotism besides entertainment. The film will definitely be liked by the youth of the country. – B.N. Tiwari, Film Director

I have gone for the third time to watch Guru Ji’s movie. It is a different film. There is a message of patriotism. The film fills us with pride and glory. The spirit displayed by the Guru Ji is wonderful and praiseworthy.

I was surprised to note that all the actors in the film were new who have no acting experience in films. The film will give a message to the youth to join the army and people will be filled with a sense of pride for the achievements of the Indian Army. – Deepak Bhanushali, Film Director

The film will be liked by everyone who watches it because it has been made on the Surgical Strike carried out against the enemy. This is an absolutely hot topic. The Guru Ji has given a clear and direct message to those who doubted the Surgical Strike. Guru Ji is a multi-talented personality and such talent is God gifted. – Ashfaq Khopekar, Chairman of Dada Saheb Film Foundation

It is a very good film and each character has played his part so well. I was deeply impressed by the performance of the Guru Ji. Despite being a Guru, He has played His role so effectively and naturally. It is a true wonder I must say.

There is a clear message in the film that humanity is the biggest religion. The film is not a fight against any nation, religion or sect. The fight is against terrorism. Everyone knows that terrorism has no religion at all. – Darshak Hathi , Director, Art of Living

Push Exam Fever Away, Manage Yourself For The Studies