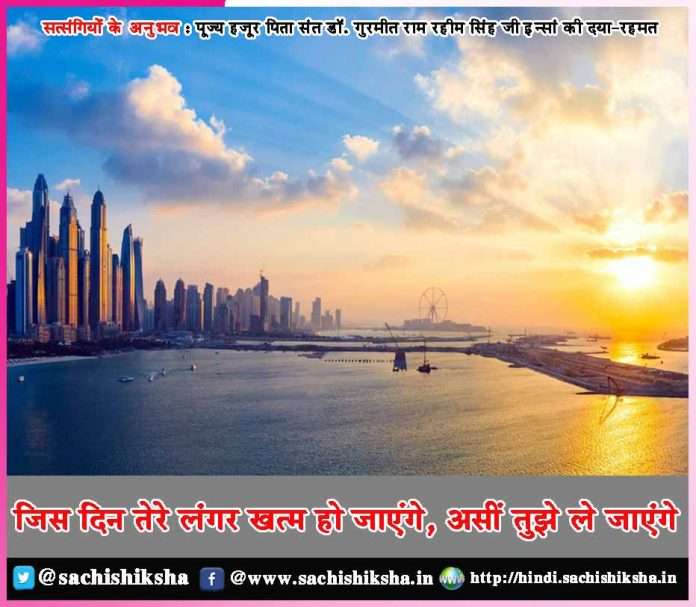 Experiences of the Devotees Benevolence of the Revered Saint Dr MSG

We Ourself Will Come to Take You at Your Last Moment

It is a matter of 29 December 2014. I was working as a laborer on a wooden saw in the nearby town of Khuiyan Sarwar. At the time of the incident, I was sawing wood. Suddenly, the blade of the saw (the blade running on the wheel while running on the saw) broke a piece of about 9-10 inches from the middle and came on the right side of my head and passed through cutting the flesh. At that time no cloth etc. was tied on the head. The saw owner immediately called the doctor.When the doctor came, seeing my condition, he was horrified, because the head was bleeding continuously, due to which the clothes were completely soaked with blood.

The doctor said to take him to a higher hospital quickly. The saw owner took my relatives with him to Gangaram Bansal Hospital in Sri Ganganagar. My condition had become such that even relatives had given up hope regarding my survival. The incident happened at 10:00 in the morning and at 12 o’clock the operation started in the hospital. But before that the doctor obtained the signature of the the relatives  and said that if he comes to senses and starts talking within two days, it will be fine, otherwise nothing can be said. According to the relatives, I died during the operation itself.

The doctors had also put a cloth over me, declaring me dead. In the meantime, the Revered  Saint Dr. Gurmeet Ram Rahim Singh Ji Insan graced me with His Vision. The Revered Father came riding on the same motorcycle on which His Holiness had appeared in the film Jattu Engineer. Boots in the feet and was wearing a very beautiful dress.

There was a bag full of langar ( Community Meal ) in the holy lotus hands of the Revered Father. I thought that at the last moment my Revered Father has come to take me as a Guru. I raised the holy slogan  Dhan Dhan Satguru Tera Hi Asra and requested. TheRevered Father! I am ready to come. You have come to pick me up. The Revered Father while smiling Said, “No son! Not today. We have to enquire about your health.’’

I said, the Revered Father, what’s in the bag? At this the ReveredFather said – ‘When a father comes to visit his sick son, he does not come empty handed.  We have brought langar for you. Your journey of life has not ended yet. When your life comes to end, We Ourself will come to take you on a two seater car.’  I understood at that time that why the Revered Father makes only two seats in every car. One for Himself and the other for His child, who has to be taken to the Eternal Abode.

When I became alive by the mercy of the Revered Father, even the doctors were surprised. He said that he has come alive, but will remain on the cot through out his life. He will neither be able to walk, nor eat, nor will he be able to hear. After twelve hours, I regained consciousness.

As soon as I regained consciousness, I called my daughter. Hearing this, all the doctors ran towards my bed and were surprised to see how such a miracle had happened. I was treated with physiotherapy for about two and a half months, because my left leg did not work. By the blessings of the Revered Spiritual Master, all my organs are now functioning perfectly. I am living life like a normal human being.

I  would never be able to pay off the debt of the favors showered upon me by the Revered Present Spiritual Father who blessed me with a new life.

Sachi Shiksha - 4 weeks ago 0
A New Sports Era for India “No one lives here forever! This land belongs to the Lord! So, make the most of the time you...

We have to go to view the drain (Ghaggar) right now