Holy Incarnation of  My Almighty Lord

Waiting for Thy holy incarnation was making the souls crazy.  We are lucky that we (souls) have been blessed by Thy Divine Vision. There is no limit to our happiness anymore. We have become of superlative degree  after having been blessed by Almighty Lord. We too have been splendid by having vision of the Supreme Personality.

Our body and mind got engaged in the glorification of God. O my dearest Spiritual Emperor, our spiritual desires have found their perfect destination today. His Holiness  has approved our spiritual wishes with His Blessings.  Due to Thy holy incarnation, every pore of the soul has attained purity. The intoxication of Thy glory has engulfed the whole universe. All around today, there is love of God& divine euphoria.

O God-Himself Spiritual Guide! Shah Satnam Ji, Thou are matchless in both the worlds. We are lucky that we have got Thy reconciliation in the for form of God.

“Blessed is the January Twenty Five, That showed God face to face & live.”   O  Sovereign Saviour of the souls!  My God-Himself Spiritual Guide, accept my felicitations on Thy holy incarnation day. Bless me by accepting my salutation to Thy holy feet. Today, 25th January is the holy incarnation day of most Revered Supreme Father Shah Satnam Singh Ji Maharaj. Millions of Congratulations!

The most Revered Supreme Father God- Himself Shah Satnam Singh Ji Maharaj descended from the Real Abode. His revered father`s name was Sardar Variam Singh Ji  and  the revered mother’s name was Aas Kaur Ji. His Holiness hailed from the holy village Shri Jalalana Sahib, district Sirsa, Haryana. His adorable grandfather Sardar Heera Singh Ji Sidhu was the Zaildar of the village. His Holiness belonged to Sidhu dynasty. His Holiness was the only child of the adorable parents.

In those days, a carefree & learned fakir happened to visit the village Shri Jalalana Sahib. He was a true saint who used to motivate people to worship God. The adorable parents invited him to their home & welcome him from the core of their heart. He stayed in the village for a couple of days & during this period, he took the meals at the house of the adorable parents. The adorable mother herself used to serve him the food. One day on having pleased, he proclaimed, “ Dear Devotees! Your devotion to worship God & sense of hospitality are supreme. Your desire of having a child will be fulfilled definitely by God Almighty. A Supreme Divine Soul will take birth at your home.”

By the extreme blessings of God & the best wishes of the fakir, after a long gap of 18 years, the much awaited wish of the adorable parents to have a child was finally fulfilled. The most Revered Param Pita Shah Satnam Singh Ji Maharaj incarnated on 25 January 1919. Adorable parents felt overwhelmed happiness. As soon as this holy message reached the villagers & relatives, there ran a wave of happiness. Every living being- be it a human being or a creature- filled with pleasure. The whole environment seemed to be singing sonorous tunes! The divine ecstasy prevailed everywhere.

On the holy incarnation of the adorable Spiritual Master, the Royal Family was congratulated by one & all. As per existing custom and tradition, platters full of jaggery, jaggery powder, home made local sweets & corn were distributed in the village. The poor bags were filled with grains. Every living being & every creature of the village thanked God Almighty for the holy incarnation of His Holiness. On hearing the holy news of the holy incarnation of the Revered Param Pita Ji, the fakir also reached in the village & extended his best wishes to the adorable parents. The fakir revealed the fact that ‘His Holiness ( the Revered Spiritual Master) will stay with you for forty years only and after that the task entrusted by God, the work of serving humanity & granting salvation to the souls for which His Holiness has incarnated, will go to the Perfect Spiritual Master who has sent His holiness as your child.’

Since childhood, the face of His Holiness was extraordinarily radiant & magnetic. Whosoever watched, just kept watching. The divine radiant face didn`t let the eyes move to other direction. The water supplier who used to fill water in the house, when he was about to go back after filling the water one day, suddenly his eyes fell on the smiling face of the Revered Param Pita Ji lying in the cradle; he lost his consciousness & kept looking at the Revered Param Pita Ji without blinking his eyelids. Suddenly the adorable mother looked at that water supplier, why is he looking at my Son like this.

He may be having an evil intention. She ran & took her Son in her lap. Seeing this affection of the adorable mother towards her Son, the water supplier smiled & said, ‘Respected Mother, I was staring lovingly at your Son because I was having the glimpse of our spiritual leaders or revered incarnated personalities in His Holiness.’ Just then the adorable mother put a black mark on His forehead & said, “ My Son is also like other ordinary children. People say like this. Let Him remain safe from evil eye.”

His Holiness had been a unique personality since childhood. His childhood was full of sweetness. His practical knowledge was far more impressive than His age group companions. His  childhood was full of noble rites & sacraments by virtue of the adorable mother because Thou were still  at a young age when Thy adorable father left for the Eternal Abode. Thou were brought up by the adorable mother and adorable maternal uncle late( Resident of the Eternal Abode) Sardar Veer Singh Ji.

It was the effect of the noble rites & sacraments of the adorable mother that His Holiness felt inclined towards  welfare & religious activities rather than materialistic ones. Whosoever- the poor or the needy- came at His doorstep, His Holiness never returned him empty handed. As per the time & the situation, His Holiness filled their bags with His compassion & benevolence according to their wishes. His Holiness completed His education as a student of Government School, Mandi  Kalanwali.

His Holiness always extended possible help to the needy. Not only the class mates but also the whole staff members were impressed by His welfare & humanitarian passion. It is generally seen that many people rebuke any needy who comes to their door & don`t offer water but His Holiness didn`t remove any animal grazing in His own fields. Rather, even in His presence, if an animal entered the fields & was grazing the crop, His Holiness would never take it out. In this way, there are lots of such examples of benevolence extended by the the Revered Param Pita Ji. When His Holiness grew up, the scope of welfare activities extended. His Holiness would participate actively in the public welfare works of the village.

His Holiness was always on the fore front to extend His contribution towards humanitarian welfare works. His Holiness got the construction work of Shri Gurudwara Sahib of the village completed while extending maximum help. Being the dignitary of the village Shri  Jalalana   Sahib, every public work was got done by His advice & direction.

His Holiness had been striving for union with Almighty Lord since childhood. It was His main objective. His Holiness used to often discuss with sages & saints. His Holiness had a yearning desire to meet a Perfect Spiritual Guide. Whenever His Holiness met the sages and spiritual leaders, verified & tested them but the desired purpose of finding the way to Ultimate Truth was not fulfilled.

Meeting with the Spiritual Guide: 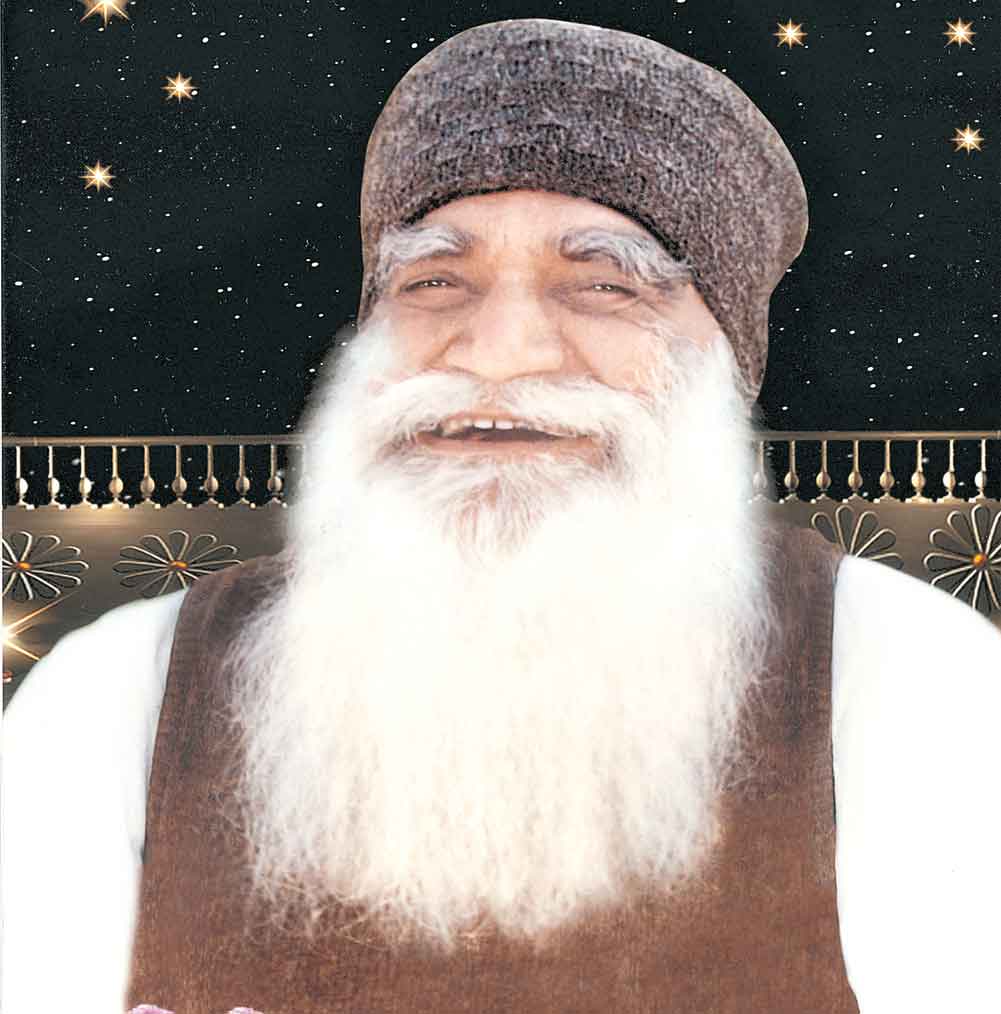 Blessing with the God`s Words:

“Most Revered Shah Mastana Ji Maharaj conducted a spiritual congregation on March 14, 1954 at ‘Dera Sacha Sauda Anami Dham’ of village Ghunkawali. After the spiritual congregation, His Holiness was personally called by the Revered Sai ji. “ It has been commanded to bless You with the God`s Words today; come inside & sit near Our seat, We are just coming there.” When His Holiness went inside, a lot of seekers of God`s Words were sitting there & there was no place near the royal seat of the Revered Sai Ji.”

Therefore, His Holiness sat in the last of  the seekers of the God`s Words. The Revered Sai Ji came inside & called out the holy name of His Holiness & asked to sit near His royal seat. The Revered Sai Ji openly declared, “ You are being blessed with the God`s Words while making You sit near the royal seat since a very special & specific task is to be entrusted to You. You will be designated as the Living Spiritual Master & the duty of bestowing the God`s Words to the masses will also be entrusted to You.”

Installation as  the Spiritual Master:

Having been installed as the second Spiritual Master of Dera Sacha Sauda, the Revered Param Pita Ji worked day and night for the welfare of the souls. His Holiness  conducted first spiritual congregation on June 10, 1962 at village Jhumba Bhai Ka ( Punjab) & thus, conducted thousands of spiritual congregations in the states of Punjab, Haryana, Rajasthan & U.P. etc for the salvation of the souls. However, His Holiness started blessing seekers with the God`s Words on April 18, 1963 ( after 03 years of His installation as the Spiritual Master).

The little spiritual sapling of Dera Sacha Sauda which was planted by  Revered Beparwah Shah Mastana ji Maharaj, Revered Supreme Father Shah Satnam Singh ji Maharaj irrigated with His tireless efforts of 30-31 years & developed it into the most the beautiful garden of spirituality. Today, under the able guidance of Revered Present Spiritual Master Saint Dr. Gurmeet Ram Rahim Singh Ji Insan, the whole world is availing itself of the ultimate truth, spiritual message, welfare & humanitarian services rendered by this spiritual abode. In the able leadership of the Present Spiritual Master,

The whole month of holy January in Dera Sacha Sauda remains the centre of hustle & bustle like the Incarnation Day Grand Celebration of January 25 & on the auspicious Incarnation Day, it becomes even more dazzling. The festival of happiness & euphoria makes the souls engrossed with divine love & ecstasy. Everyone finally gets immersed in its divine fragrance. Millions of Felicitations on Auspicious 25 January!