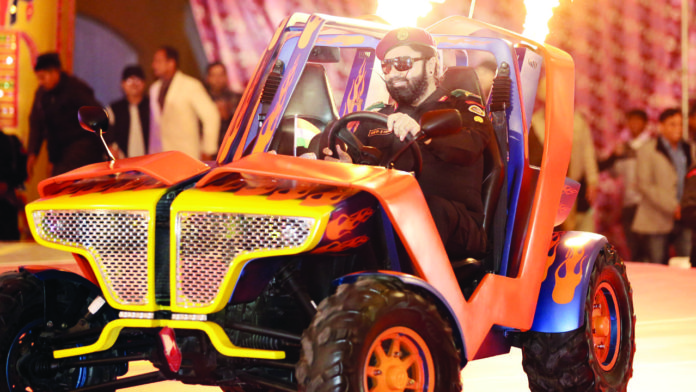 Every Cinema Hall Reverberates with the Roar of ‘Sher-E-Hind

Earns good business with name and fame
21 Days Collection 261 Crore
A new chapter was written in the history the Indian Cinema on Friday, February 10. With a bang, the film was released on more than 3000 screens.

Dr. MSG’s film ‘Hind Ka Napak Ko Jawab (Lion Heart 2)’ has created a wave in not only Bollywood, but Hollywood also. On the first day of the release, all the cinema halls and malls remained houseful. Viewers rushed to the ticket counters to see the film. While at most of the cinemas ticket seekers rushed at many places, the spectators started standing at the ticket counters from 6 am.

Long queues of people were seen at the cinema halls even before the first show ended. . At many places people stood in long lines to book tickets two days in advance. At the Mahi Cinema in Sirsa the spectators were seen singing and dancing at midnight. They really enjoyed the DJ playing film’s songs. They took out ‘Jago’ to express their happiness. The cine goers wore MSG cap, MSG T shirt and kept chanting ‘Sher-E-Hind’.

Every cinema hall had large number of MSG fans. People had a passing for the film. Some sang, some danced. Others celebrated the occasion by bursting firecrackers. Everywhere one slogan was being heard in unison ‘Sher-E-Hind…, Sher-E-Hind…’.

At several places the songs of the film was being played loudly. While at some places sweets were being distributed, at many places flowers were showered on the people. It is a well-known fact that our neighboring country Pakistan has become the headquarter of terrorism.

It is brainwashing and misguiding the youth in the name of ‘Jihad’ and pushing them into terrorism. These people who are enemy of the society and the nation and are hell bent on destroying peace in the world. Their dream, aim and ambition is to destroy the world with weapons of mass destruction and terrorism.

These terrorists are playing with fire killing and injuring innocent people for no fault of their own. But the nefarious activities of the death- mongers who have no love for humanity, have been totally exposed by Dr MSG’s fourth film ‘Hind Ka Napak Ko Jawab’. Released on Friday, this film is a big slap on the evil face (Napak Chehra). The film has exposed all the evil plans of Napak which it has been preparing for last several years for destruction of India.

In reality the film is based on the surgical strike by the Indian Army after the Uri attack on military base. The film shows a brave Indian warrior in the role of ‘Sher–E-Hind’ who is immensely brave. He works as a top secret agent in a foreign country and by frequently changing his looks and make-up traces the secret training camps of the enemy and destroys them with his brave effort. He becomes a model for India by defeating the nefarious designs of the evil forces.

The film also exposes how Pakistan is mercilessly treating the women and children in the Baluchistan province. The ruthless treatment of the people of Baluchistan is hair raising. The film’s story tells us that patriotism does not only mean fighting the enemies of the nation, but to fight every evil force working against the interest of the nation and the people. These forces can be working either within or outside the nation, on the borders. Wrapped in the colour of patriotism, the film gives message of fighting the enemies of the nation.

The super hero of the film will create feeling of love for your country and patriotism. Terrific Technology, Every Stunt Amazing: Based on the surgical strike after the Uri attack when India gave a fitting reply to terrorists in their own territory, the stunts in ‘Hind Ka Napak Ko Jawab’ are simply amazing. The scenes leave the spectators stunned.

As soon as the film’s super hero Dr MSG switches on a button in his watch, the same switch when pushed again was capable of turning into either superbike or supercar. At other times pen or a chip, when thrown becomes drone camera and starts flying in the sky like a falcon. Not just that, by pushing the button of the high-tech watch butterflies start flying which later blast the enemy terrorist camp.

This super watch is a means of video chat, which Sher-E-Hind uses in the film time and again. People were amazed to see such hair raising scenes in the film. All in all, it is a stunt based film completely. Every action in the film is amazing. It also has a mix of romance with suspense. While the dialogues in the film are terrific and have a mix of three D.Like the previous films, this film is also entertaining the spectators a great deal. But entertainment is not the sole purpose of the film.

There is a message of patriotism also. The film gives a message of how people give up their lives without complaining to save the honor of the country and its people. There is also a message of sacrificing one’s life for the beloved motherland. Fitting Reply to Those Who Raised Fingers Earlier It is not just India which considers Pakistan a terrorist nation.

Other countries too think on the same lines. Pakistan has become synonyms with terror. In fact voices are being raised from different corners of the globe to declare Pakistan a terrorist state so that it stops transporting terror to other countries. In such a situation, Dr. MSG’s fourth film ‘Hind Ka Napak Ko Jawab’ has clearly exposed the nefarious activities of ‘Napak’ and shown the world that the seeds of terror are shown on the land of Pakistan. The nefarious activities of ‘Napak’ have been filmed so minutely.

The film has also given a fitting reply to all those who raised fingers on India’s Surgical Strike on the terror camps beyond its borders. Youth Taking Oath to Serve the Nation: Encouraged and inspired by the brave feats of ‘Sher-E-Hind’ in ‘Hind Ka Napak Ko Jawab’ the youth of the country is taking a pledge to serve the country.

In the earlier films of Dr. MSG, there were also messages of patriotism. In the first film (MSG The Messenger) also, there was a patriotic song, ‘Jiyenge Marenge Mar Mitenge Desh Ke Liye…’ The 3rd film ‘MSG The Warrior Lion heart’ also Dr. MSG was in the role of the ‘Lion Heart’, a patriotic warrior who wages a war against the enemies of the nation. The theme of this film was also patriotism.

Amalgamation of Mystery, Romance and Patriotism:

Dr. MSG made a grand appearance on the silver screen for the fourth time in two years with the film, ‘Hind Ka Napak Ko Jawab’. Her Daughter Honeypreet Ji Insan has also played a sterling role in the film along with Him.

Besides Dr. Aditya Insan, Deeksha Insan, Dr. Dilawar Insan, Rakesh Dhawan Insan, Ramesh Chahal Insan, Dr. Ajay Gopalani Insan and Dr. Meena Insan have also performed well in the film. The superhit pair of Dr. MSG and His Daughter and their roles, action and dialogues deeply impress the audience. They tie the spectators to the film, ‘Hind Ka Napak Ko Jawab’. Pakistan Prime Minister’s statement in the film, ‘‘He himself is alive for the last five years and is not able to digest our 75 years of existence’ speaks for itself.

This expresses the fear of ‘Sher-E-Hind’ in the minds of the enemies of the nation. Made in the superhit pair of father and daughter, the excellent film leaves its mark. The film’s story moves ahead smoothly like a free-flowing river.

Despite being fully aware of the outcome of the surgical strike, the audience cannot help seeing the film till the end. Dr. MSG has also beautifully composed the film’s songs, ‘Jung Hai Hamari Atankwad Se…’, ‘System Hil Gaya…’, ‘Thank you for that…’. Film’s background music has also been composed very well. Music in the background ‘Aag ka dariya’, ‘Samudra ka toofan’, ‘Sher-E-Hind’ is also composed well.

– Sandeep Kamboj. Shopkeepers downed their Shutters to see the Film There was a passion and a craze generated among all sections of society to watch the highly anticipated and eagerly awaited film, ‘Hind Ka Napak Ko Jawab’ .

Shops remained close from Sirsa to the different cities of the country in the happiness of the release of the film. Such was the maddening craze for the film that at many places the shopkeepers downed their shutters to watch the film. All of these people headed straight for the cinema halls and enjoyed the film. ‘Halwa’ and ‘Ladoos’ Distributed On the first day of the release of the film, people distributed ‘Halwa’ at some places to express their joy and happiness.

Other people distributed sweets. Outside the cinema halls and malls it was a festival like situation.

Lesson of Service to the Nation:

When the spectators came out of the cinema halls after watching the movie’ Hind Ka Napak Ko Jawab’, there was a feeling of pride and glory, love and respect for the nation. They were filled with pride for having witnessed the destruction of the enemy and victory of the country after teaching the terrorists a bitter lesson. In the film, Dr. MSG is shown entering Pakistan and destroying the terror camps to protect the national interest He is also seen saving the helpless people of Baluchistan from the tyranny of the enemy nation.

Reactions of the Prominent People

I am very excited for giving the terrorists a ‘heavy dose’ by our brave soldiers.

From the promotion of the film through social media and posters, it was known in advance that the film was made on the subject of patriotism. After watching the film today, I realised that a true and genuine effort has been made to make a patriotic film. It fills the people with pride. It is also a fitting reply to all those people who were raising doubts on the brave efforts of the Indian soldiers.

For such people it is a lesson to remember not to doubt the efforts and abilities of the patriots and brave soldiers who sacrifice their lives to save the honor and integrity of the nation. Such doubting people who were asking for proof of the surgical strike have been totally silenced now, all because of the film.
Subhash Barala, Haryana BJP President and MLA, Tohana (Haryana)

Holy Incarnation of  My Almighty Lord, Sovereign Saviour in This &...