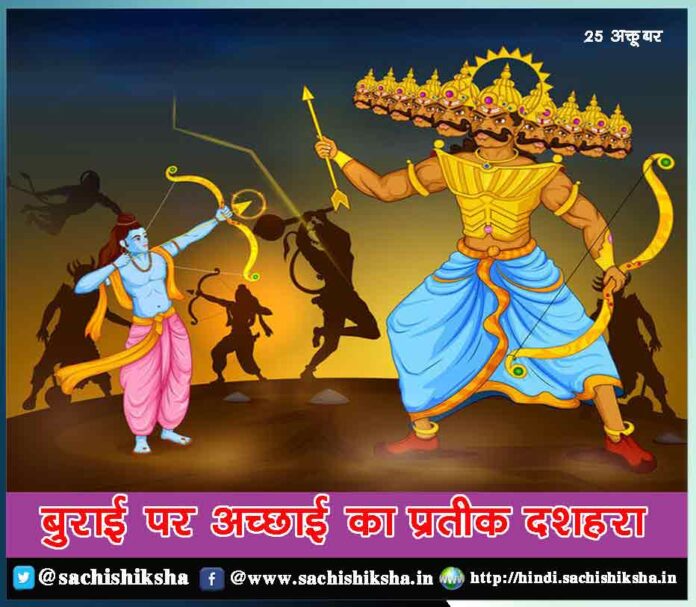 Dussehra followed by Navratri is one of the most popular festivals celebrated in India. Majority of the Indian festivals relay the message that good always takes over evil in one way or the other but the festival that shows the clear victory of  good over evil is Dussehra. It is celebrated precisely twenty days prior to Diwali with enthusiasm and rituals across the country. The underlying spiritual significance behind all these traditions is the victory of good over evil and the resurgence of hope and faith. The final celebration of the nine day long worship of Maa Durga is the tenth day, Dussehra hence it is also known as ‘Vijaya Dashami’. During the epic battle of Ramayana, Lord Rama had to chop-off the ten heads of Ravana. Lord Rama had to fight Ravana for about seven days in order to have a victory over him since every moment Lord Rama cut Ravana’s head another head appeared there.

Ravana the ‘King of Lanka’ was a very learned Vedic scholar and a devout follower of Lord Shiva. Although he possessed enormous intellect but was an arrogant and a cruel demon king. As per one school of thought the 10 heads that are also termed Dasamukha represent 6 Shastras namely Nyayashastra, Yogshastra, Sankhyashastra, Vaisheshik, Purvamimansa and Uttar mimansa and 4 Vedas namely the Rigveda, the Samaveda, the Yajurveda and the Atharvaveda

As per another legend, the 10 heads of Ravana signify ten negative emotions owned by a human being-

These are all negative emotions or distorted forms of love. If seen every action and every emotion is a form of love. Ravana was also plagued with these negative feelings and due to this he was destroyed despite his immense knowledge and prosperity. He consumed his powers while doing evil things. He personified someone very materialistic and exhibited excessive lust, greed and love for power. Although he possessed a gold kingdom and high stature he was always filled with anger, hatred, jealousy, ego and fear which led him to an unhappy life. If one leads a life filled with high intellect but no compassion or love for people around then that person becomes egoistic.

While on the other hand is Lord Rama, the ‘King of Ayodhya’ known as the Maryada Purushottam which in literal words means Lord of Self-control/virtue. Lord Rama led a life while adhering to dharma perfectly even though He faced harsh and tough tests throughout His life. He obeyed His father King Dashratha and in order to fulfill the promise made by His father Lord Rama withdrew His claim from becoming the King of Ayodhya and set out with His wife Sita and His brother Lakshmana for the exile without even a pinch of doubt in His mind. Lord Rama is the most proper personification of a spiritual personality, selfless love, bliss and peace.

Thus we can see the two contrasting personalities in Lord Rama and Ravana where Rama displays spirituality and Ravana the materialistic & Satanic qualities. On one hand Lord Rama is a symbol of Goodness and morality while on the other hand Ravana is a symbol of negative, egoistic and evil thoughts. It is believed that every human being encounters the good (Rama) and the evil (Ravana) within himself as the life subjects him to emotional, mental and physical aspects of being decisive. Although Ravana possessed boons and superpowers from Lord Shiva and Lord Brahma he was defeated in the battle since his evil thoughts took over his knowledge and intellect. Thus, Dussehra instills strength among the people so that they can be encouraged to lead a life of virtue, peace and bliss as Lord Rama did.

Therefore, on the occasion of Dussehra effigies of ten headed Ravana along with his brother Kumbhakarna and his son Meghnatha are set to fire all over the country. These effigies are also stuffed with fire crackers. When they are set ablaze in the open grounds it is assumed that the people also shun all their negative thoughts and emotions in that fire so as to lead a life full of bliss.

Often people say that the world has become untruthful and inhumane but it still is a fact that the truth and humanity always wins in the end. Dussehra provides us with a chance to re-investigate our inner self and our demonic side which we always set aside and overlook. On the auspicious occasion of Dussehra we should pledge to set fire to our excessive desires and emotions that keep growing within ourselves instead of nurturing them. Then only the Rama (goodness) can have a perfect victory over the Ravana (evil) and lead us to the path of eternal happiness.

To conclude, it would be the most proper to state that the ten heads of Ravana imply that if you possess or desire to possess more than what you require then the things lose their purpose thereby leading us to a path of self destruction. So conquer the evil within yourself and live a life of bliss and contentment.