At Discourse, the Sinful Deeds get Destroyed

Most blessed and well seated spiritual followers of God.

When a person walks into the discourse, the sinful deeds of previous births start getting chopped merely by sitting in the discourse.

The sinful acts done in this birth are chopped by the Spiritual Saint by doing prayers and to get the sinful deeds of previous births chopped. He hands over God’s Word to him that O brother, keep reciting, your sinful deeds will keep on getting chopped, you will become worthy of the mercy and grace of God.

Then, the more the people keep on reciting God’s Word the more they keep on becoming worthy of the mercy and grace of God.

-Make sure of Devotion and Prayers

No matter how much the variety of the food is lying in front of a person, till such time he does not eat, the taste is not felt and he also does not get the power.

No day should go without the devotion of God. This will make the time to come a reason for happiness, if you recite God’s Word.

-Perform your duty towards the children, do not get entangled them

The human being is always lost in the children, family, affection and greed. He is lost in lust, and ego.
The truth is that except for the sorrows, pain, perhaps there would be some lucky person who is spared otherwise one gets pain from all these things. For example, you rear children and raise them.

Indian culture is that a lot of love is showed! You do not eat but the children are fed. We do not talk of the present times, perhaps such a thing does not happen these days, but Our culture is like that…. And teaching children, cherish dreams for them is a duty of every parent and the parents follow these. The children grow up, the parents become happier that now they will be with us and go shoulder to shoulder with them. 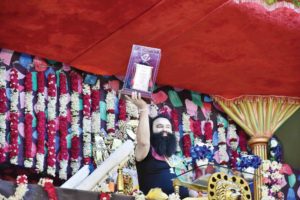 But the children grow and their company becomes wrong then instead of going shoulder to shoulder, they bend your shoulder. Then the pain that troubles them cannot be shared by any parents with anyone, and neither do they tolerate.
But there is no effect on children.

-The child, who supports you in spiritualism, is yours

It happened during the times of some saint, great man. Once, a gentleman went to meet him and said that how a devotee is? I have practised austerity, but I did not get God! O sir, leave the God aside, I do not ever see any devotee apart from you! Then the saint said that at a certain place, there is a shopkeeper, he is a great devotee.
Go to meet him and he will give you the knowledge! He will tell you as to what devotion is…. Now a hermit, a person known as a bachelor and he was sent to meet a family person! He became red with envy that whether he or I am a bigger person in status! But the saint has said that then there is something.

But he is angry from inside that I am a hermit, did austerity and I am being told to meet the family man if you want to learn devotion! Then that gentleman went there. He thought that let me get some information about him! Then he made complete bio-data of him by asking about him from the villagers. Then he went to meet him and said that I have been sent by the saints, you are a devotee of high status.

Then the shopkeeper said with folded hands that who is a devotee! There is nothing inside him to be known as devotee! But it is due to the saint’s grace that I became a devotee. After listening to him, he felt a bit that O friend, there is no ego in him! And I am about to burst with ego! Then he asked how many children has he got? He replied that he has one child.

The bachelor became angry! He said that you are telling a lie! I have got the information from the villagers that you have four children! The shopkeeper started laughing and said that that is the reason why you did not become a devotee.

The hermit became more angry , and said that you are a lier and you are saying that I could not become a devotee! He made the hermit sit down and said that there are no doubt, four children but I do not accept them as my own children.

I have two children who are cheaters, do business, are dishonest and suck blood of people. I teach them that my Spiritual Guide has taught me that you should eat by working hard! But they apply corrupt methods and are dishonest! They do not care for the name of God. The third, he has all the wrong habits! He does intoxication and visits prostitutes.
The hermit said that someone whom you tell us as your son, how young he is ! He said that he looks after my shop and sits with me and eats by working hard.
In the morning when I sit for recitation, he wakes up ahead of me and wakes me up, too and sits for recitation for his own self, too.

He draws out a tenth, fifteenth part of his earnings and goes to help the needy. He practices all the words fully as told by the Guru ji, then dear hermit In my vision, he is my son who supports me in spiritualism! Someone who is spreading my name! who is going along with me! We have to give birth as this is the order of the God. People keep on yearning for a child.

But this is an order of God, the children come into this world, but all the children are not yours .
That child is yours who supports you in spiritualism. This was the hundred percent truth, was a truth and will remain a truth forever.

This is the truth of the present times. Those who support you are your parents, those who go with you are son and daughter, only they are yours, the rest are spent dreams. You never know as to when was the dream viewed and when did it get spent. 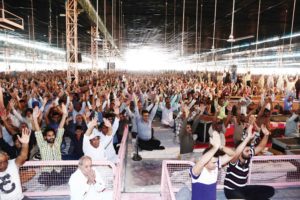 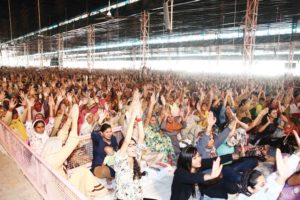 The Power of Flexibility in Your Life