Cuckoo An Introduction The balance of the environment is very important. In hot days people’s throats become dry and they drink cold water, the birds also look for water when they are thirsty. If small birds drink water collected in ponds and pits, the water gets hot.Cuckoo An Introduction

Along with that, their enemies also hunt them on the spot. Therefore, in order to give cold water to the birds, fill the water in a pot of water every day around your house. Along with this, if you put some substances to eat, you will see that the birds become your best friends. Sparrow, pigeon etc.

living in homes will be visible all day. These birds prepare a good atmosphere for us. In the summer and rainy days, the sweet sound of the ‘cuck-oo’, ’cuck-oo’ make the mind fresh and make us happy. This sound belongs to the cuckoos.

This bird is a summer guest and goes there as soon as the summer ends. Cuckoo is a bird that is similar to a domestic crow. However, there is a lot of difference in the nature of both.

While the crow’s voice is very harsh, the cuckoo sings the song in the melodious voice. The size of the cuckoo is also smaller than the crow. Due to the similarity of these two, it is said that cuckoo keeps her eggs in a crow’s nest and the crow abides by understanding it as his own. Young birds are similar, but when these young birds grow up, they are known by their voice, but their attachment to eggs is such that he does not cause any harm to thechildren. Cuckoo’s caudal is a bit longer.

The color of the male cuckoo is bright and the beak is green in yellowing. Its eyes are dark red. The female cuckoo is brown in color. White spots and stripes are also found on her body. This bird is found everywhere in India. There is a lot of confusion about the cuckoo that the female cuckoo performs ‘cuck-oo’, ‘cuck-oo’ in harmony, which is very sweet.

But according to bird experts, the sound of male cuckoo birds is melodious. With its tuneful voice, he attracts the female cuckoos. 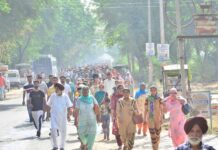