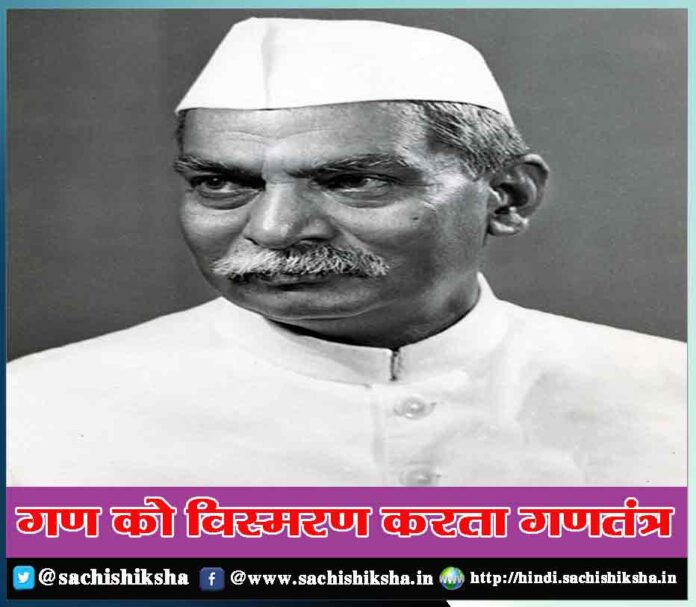 Let us understand it through an example. There is a lunatic asylum where lunatics come & live there for treatment. But the specialist doctors also come & live there to treat the lunatics. Both the lunatics and the doctors live in the same hospital. Accordingly the Perfect Spiritual Saint moves about in this materialistic world so as to bring on the right track the people who are mad due to the evil-mind, illusion & lust.

Let us take another instance to clarify this point more thoroughly. Peter King went to the Netherlands to bring back the people who had been expelled from their country, Russia, on the pretext of learning the work of shipping where they worked as labourers. The king also took the form of a labourer like them.

The king should glorify his country, talk to them about his country. Hearing this, they also expressed their desire to go back to their own country but they told that they had been expelled from their country. At this, the king assured them that the king was a close friend of mine. I am sure he will listen to me & allow you to be there. Those who believed his words walked with him & those who did not believe that he is a labourer like us, how could he befriend the king, they remained there engrossed in these things.

The king entered his capital, every one should welcome him. Seeing the warm welcome and respect extended towards the king, the labourers felt encouraged that this person could be a close friend of the king. When the king seated on the throne in front, the labourers thanked the king a lot for being a labourer like us so as to bring us back. The heart was filled with detachment & gratitude that what we knew is our king himself. This is the same situation between materialistic human beings & the Perfect Spiritual Saint.

Revered Param Pita Shah Satnam Ji Maharaj dedicated Himself to the cause of humanity.

In one of H is hymns, the Revered Param Pita Ji has written thus:

Will bring you back & do anything diligently,
Will redeem you from Negative Power doubtlessly.

His Adorable Parents were very pious & religious minded. They used to serve the saints & the sages very sincerely. They used to keep engrossed in the worship of God. There was no shortage of any worldly things but the desire to have a child would torment the Adorable Parents all the time. All the villagers were aware of this family`s deep reverence for God Almighty, compassion for the afflicted, and they were sympathetic with this family.

In those days, a carefree & learned monk happened to visit the village Shri Jalalana Sahib. He was a true saint who used to motivate people to worship God. The Adorable Parents invited him to their home & welcome him from the core of their heart. He stayed in the village for a couple of days & during this period, he took the meals at the house of the Adorable Parents.

The Adorable Mother herself used to serve him the food. One day on having pleased, he proclaimed, “Dear Devotees! Your devotion to worship God & sense of hospitality are supreme. Your desire of having a child will be fulfilled definitely by God Almighty. A Supreme Divine Soul will take birth at your home. After a few days, the monk went to another village. By the extreme blessings of God & the best wishes of the monk, after a long gap of 18 years the much awaited wish of the Adorable Parents to have a child was finally fulfilled.

The most Revered Param Pita Shah Satnam Singh Ji Maharaj incarnated on 25 January 1919. His Holiness was the only child of the parents. His Holiness belonged to Sidhu dynasty. The Adorable Parents named His Holiness as Sardar Harbans singh Ji. Later, Most Revered Shah Mastana Ji Maharaj christened Sardar Harbans Singh Ji as Sardar Satnam Ji. As soon as this holy message reached the villagers & relatives, there ran a wave of happiness. Every living being- be it a human being or a creature- filled with pleasure.

The whole environment seemed to be singing sonorous tunes! The divine ecstasy prevailed everywhere. On the holy incarnation of the Adorable Spiritual Master, the Royal Family was congratulated by one & all. As per existing custom and tradition, platters full of jaggery, jaggery powder, home made local sweets & corn were distributed in the village. The poor bags were filled with grains. Every living being & every creature of the village thanked God Almighty for the holy incarnation of His holiness.

On hearing the holy news of the holy incarnation of the Revered Param Pita Ji, the faqir also reached in the village & extended his best wishes to the Adorable Father Sardar Waryam Singh Ji. The monk revealed the fact that His Holiness (the Revered Spiritual Master) will stay with you for forty years only and after that the task entrusted by God, the work of serving humanity & granting salvation to the souls for which His Holiness has incarnated, will go to the Perfect Spiritual Master who has sent His holiness as your child. Coming events cast their shadows long before. Whosoever watches, just keep watching. The divine radiant face didn`t let the eyes move to other direction.

The water supplier who used to fill water in the house, when he was about to go back after filling the water one day, suddenly his eyes fell on the smiling face of the Revered Param Pita Ji lying in the cradle, he lost his consciousness & kept looking at the Revered Param Pita Ji without blinking his eyelids. Suddenly the Adorable Mother looked at that water supplier, why is he looking at my Son like this. He may be having an evil intention. She ran & took her Son in her lap. Seeing this affection of the Adorable Mother towards her Son, the water supplier smiled & said, “ Respected Mother, I was staring lovingly at your Son because I was having the glimpse of our spiritual leaders or revered incarnated personalities in His Holiness. Just then the adorable Mother put a black mark on His forehead & said, “My Son is also like other ordinary children. People say like this. Let Him remain safe from the evil eye.”

The Revered Param Pita Ji was an ocean of kindness since His childhood. This truth is widely known in the whole region. Whosoever – the poor or the needy – came at His doorstep, His Holiness never returned him empty. As per the time & the situation, His Holiness filled their bags with His compassion & benevolence according to their wishes. Once there was a drought in the area. Every one was helpless. In such a difficult time, the Royal Family came forward & helped every needy person.

Giving food to the hungry & water to the thirsty may be taken as an ordinary thing but who does such a pious act. It is generally seen that many people rebuke any needy who comes to their door & don`t offer water but His Holiness didn`t remove any animal grazing in His own fields. Rather, even in His presence, if an animal entered the fields & was grazing the crop, His Holiness would never take it out.

This happened once when His Holiness was sitting under observation in the field. Every day a buffalo would come & start grazing the crop of gram. His Holiness would never remove it from there. The buffalo used to fill its stomach & sit beside His Holiness. This complaint was made to the Adorable Mother. Next day His Holiness patting the back of that buffalo said, “Dear Devotee! Now somebody has complained. Therefore, don’t graze the crop standing in one field, rather graze the crop while moving in different fields.” And all the villagers are a witness to the fact that after that day no one had seen that buffalo standing in a field & grazing the crop. In this way, there are lots of such examples of benevolence extended by the the Revered Param Pita Ji.

Meeting with the Benevolent Spiritual Guide

Divine Voice when blessed
All worries are vanished

And think about the Voice of God that removes all tensions & griefs.

Leader of the Living Spiritual Leader:

Yet Another Arduous Test:

As per holy orders of the Revered Sai Ji, His Holiness was profusely decorated from top to toe with garlands of currency notes. His Holiness sat on a jeep & led a solemn procession throughout the city of Sirsa. Thousands of the devotees of Dera Sacha Sauda participated in this procession. Every body was astonished to witness the splendid occasion & came to know that sardar Harbans Singh Ji of Shri Jalalana Sahib has been declared as the Spiritual Successor to the Revered Shah Mastana Ji Maharaj. On its return to Dera Sacha Sauda, the procession was welcomed on the road by the Revered Sai Ji Himself. The Revered Sai Ji declared publically, “From today, We have transformed Sardar Harbans Singh Ji from an individual self to Satnam-the Supreme Power, from an individual soul to God-Himself.

The Revered Sai Ji stated in the spiritual congregation

“ From today onwards, We have granted Sardar Satnam Singh Ji Our Own Form. This is the same Satnam whose holy name the people of the world kept reciting throughout their lives. By holy orders of the Revered Sawan Shah Sai Ji, we have brought Shah Satnam Ji from the abodes above & placed His Holiness before all of you. Whosoever chances to have His Vision even from the back will not go to the Hell. His Holiness will save him by virtue of His benevolence.”

As the second Spiritual Master of Dera Sacha Sauda

The Benevolence of the Revered Param Pita Ji:

Millions of felicitations on the occasion of the Holy Incarnation Day!