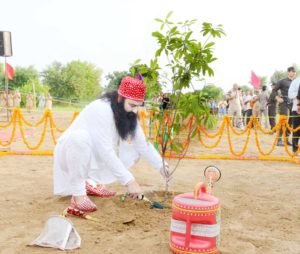 The Incarnation Day of Revered Guru ji on August 15 is celebrated by the Dera devotees as a festival.

The campaign was launched by the Revered Guru Saint Dr. Gurmeet Ram Rahim Singh Ji Insan who planted a sapling. The celebration began at 7:00 am in the morning. On this occasion members of the royal family, children from the Shahi Betiyan Basera and Shahi Ashram Ashram and the volunteers of the Dera planted saplings.

The devotees of the Dera reached the venue selected for the tree plantation drive early in the morning and began planting trees. The devotees planted medicinal and fruit-bearing trees to give society a great gift of cleanliness. Duties had been assigned to the volunteers for the tree plantation drive in different states of the country including Haryana, Delhi, Rajasthan, Uttar Pradesh, Madhya Pradesh, Punjab, Uttarakhand, Himchal Pradesh and at other places.

The Dera volunteers planted saplings on various public places including schools, colleges, cremation grounds, and religious spots in various villages and towns. They also planted trees on the banks of the rivers, near ponds, main roads and at various other places. Trees were planted in various cities of the country as well as in foreighn countries like

Australia, Canada, New Zealand, UAE, America, Italy, Germany, Kuwait, Nepal, England and other countries. Devotees from the Dera Sacha Sauda planted more than 40 lakh trees at various places to celebrate the birthday of Revered Guru ji. It is interesting to note that for the construction of the national highways in the countries, lakhs of trees have been cut down.

In Punjab alone for example, more than 9 lakh trees had been chopped down in the last five years. In Haryana also lakhs of trees have been put to axe cut to make way for the upcoming roads. The cruel campaign of cutting down trees goes unabated in the country endangering the environment.

By planting new tress greenery will return to the places all over again and the earth will look green again. Conversation with the media which reached the spot for a special coverage of this great event Till now 3 crore, 43 lac, 31 thousand, seventy five saplings have been planted at various places in the country Talking to the media, Rev. Saint Dr. Gurmeet Ram Rahim ji Insan said, it was on August 15 that India got independence and he was born on the same day.

The devotees said they wanted to gift Me something….I said , if you want to give Me some gift then give me the gift of tree plantation so that the entire world gets a message of peace and goodwill. Today on this occasion medicinal and fruit bearing treess will be planted around the world so that the environment remains clean and healthy and the people also get fruits of the trees. So far the Dera devotees have planted 3 crore, 23 lakh, 31 housand and 75 trees during such campaigns. Around 76 per cent of these trees are also bearing fruits, He added.

Celebrate the all Important Day of Your life by Planting Trees; Revered Guru ji said, people either celebrate their birthdays or observe the death anniversaries of their parents. Plant trees on such occasions. Also donate blood to make the day memorable.

If you plant trees on happy occasions, you will get blessings of God also. If around 100 relatives plant an equal number of trees, it will be all the more beneficial to the environment.
Give place to faith instead of blind faith. Around 4-5 thousand trees in the Ashram have been planted around the places where the human bones had been deposited in the ground.

These trees are bearing good fruits also. Because of the presence of the human remains their phosphorus and other chemicals are absorbed by the plants and trees around them. The environment also gets cleaned in the process. Trees are never cut in the Ashram. The trees are actually shifted to other places by uprooting them from their original place.

At Saint MSG Glorious International School children are also being taught along with the regular studies, the benefits of remaining closer to nature and taking care of it.

Addressing the journalists, Revered Guru ji said only those people should be appointed Brand Ambassadors who go to the people to motivate them. Only the players should be made the Brand ambassadors of sports who can motivate people against drugs and other bad habits.
Bring clean athletes from the villages and introduce them to the cities. Generally people are made brand ambassadors just like that going by their faces. Such people are neither able to motivate people, nor anybody among us is ready to listen to them. There is no point in making such people brand ambassadors.

Commenting on the tree plantation programme being carried out by the Government of Haryana to mark the establishment of the state as Golden Jubilee Celebrations, Revered Guru ji said, We have been planting trees for long and are ever ready to support and collaborate in any good move.

Talking about the cleanliness drive in various state of the country at the same time, Revered Guru ji said, people of this country do not require permission from anybody to spread dirt and dust all around, whereas for launching any cleanliness drive it is necessary to take prior permission.
If the Prime Minister gives permission for a great cleanliness drivel then it seems it is possible to clean many states to a great extent.

There is no dearth of talent in Our country, but bringing them forward has become a problem. I used to play 32 national games Myself and am also an International Level Coach. Girl students of the Shah Satnam Ji Educational Institutes have become World Champion in Yoga for four times and have brought 30-35 medals also. The body of the players must be powerful. They must possess speed, strength and proper technique.

The Fifth film will be a comedy:

`Lion Heart’ film is the story of a great warrior 300 years ago. There is reality and a bit of imagination. The Great Warrior fights with the aliens and saves the honor of the sisters and daughters. Next, the fifth film by the MSG production will be a comedy .

The sets for this comic film are ready. Sirsa can also become a film city hub in the country. Here VFX World, Shooting Hall are already constructed. Shooting area is huge and well equipped with all modern facilities. 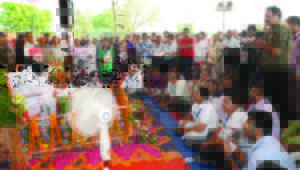